I like to think I am super clever with my blog titles. But anyways, I went to the cities of Bristol and Bath last weekend and had a pretty good time!

First, I must say that I was VERY pleased with the scenery going into Bath. Bath is located in a sort of a lower point of a valley so driving into the city, our bus was on a higher road and out the window I could see rolling hills of sheep, grass and those amazingly stereotypical short stonewalls used to divide property. Finally seeing that side of the countryside was so satisfactory because that is the image I have had of England in my head for so long and I finally got to see it! I’ll be honest. I love visiting the different cities of England, but I could easily be just as satisfied if not more so walking over hills and petting sheep and simply breathing in the air of England. I love landscapes and scenery more than cities I would say and England showed me just how pretty its landscapes were! So the ten minutes before we arrived in Bath were pretty amazing for me. I was just leaning my head against the window and smiling, enjoying the view.

Glad I could share that moment with you. Moving on! Okay so in Bath, there are the infamous Roman baths which are natural hot springs that the Romans built around so they could be utilized as, you guessed it, bathes! However, you have to pay to view them and the day I went, the lines were long, I didn’t have a lot of time, I really wanted some food and didn’t feel like spending the money. So I sadly did not see the Roman bathes but I’m not all that disappointed. My friends who did see it said it was cool to see in person but it was the same as opening up a history book or going online and seeing a picture or video of them. Then I didn’t feel so bad. Bath was different because it did not have the same red brick I have seen everywhere else in England. Instead the buildings were made of limestone, so they were much lighter in color and more flat because they lacked the texture of hundreds of bricks. Visually it was appealing because I have been seeing the same red brick so limestone was a nice change of pace. I mostly stuck with my one friend, Megan, and we basically just walked around the city, saw the outside of the Abbey, sat and enjoyed the sunny (yes, it was sunny in England; a freaking miracle) in a park next to the river with a name I can’t remember but you all have access to maps so if you really want to know look it up. Anywho, it was bizarre walking the streets of Bath, through the city centre (again, that has the same meaning as downtown or shopping centre) with all the modern stores and tea shops because above the stores were the limestone walls. I stopped to look up at the buildings and ignored everything else, and it felt like I was almost transported in time. I imagined Romans walking the streets in togas and sandals, discussing politics or gossiping about their neighbors, and then I look back down and see the modern world and it is just such a bizarre feeling to be standing in such an old city that has seen millions of other people over the course of centuries. It was bizarre. I wish we had more time in Bath but we eventually had to leave to drive to Bristol, which was not far at all. They are nearly neighboring towns. (Pictures from Bath directly below, if you click on them, they each have a short caption). 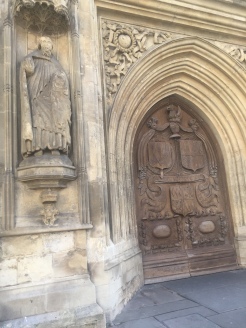 the rive in Bath 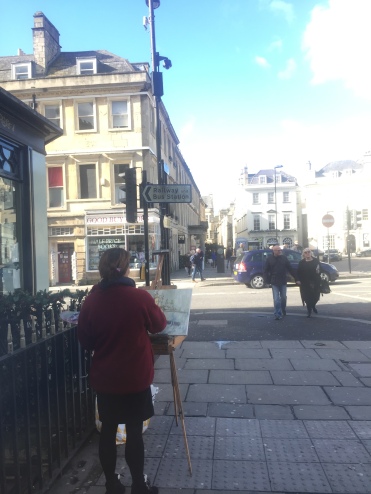 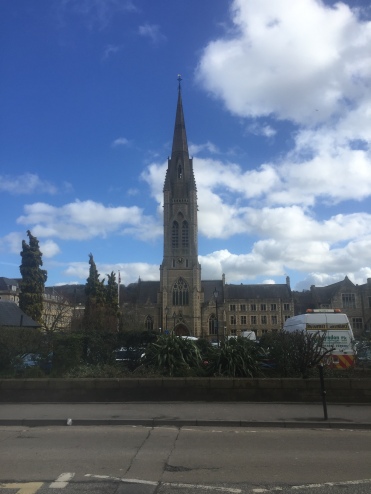 a cathedral in bath 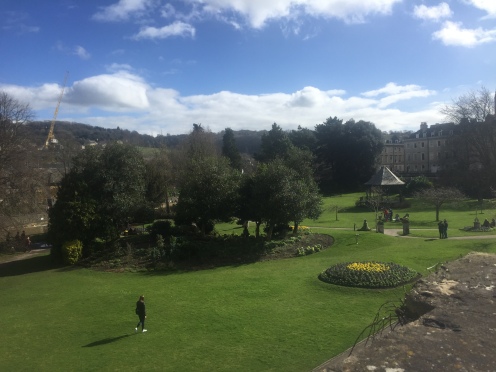 other side of the lovely park in Bath

side of the Abbey in bath

diff. angle of the river in bath 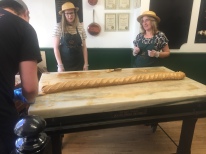 It was really weird to go from the historic, Roman city of Bath to the more industrialized, bohemian port city of Bristol. Bristol has two parts: the super rich, classier part with $3-4 million apartments (maybe someday I’ll be there) and then there is the graffiti-filled, urban part of Bristol. In the classier side is the first ever suspension bridge. That sounds cool. But let’s all admit what we’re thinking. It’s a bridge and it was not life changing. So then we took a walking tour of Bristol (which took so much longer than I thought and we barely had any free time to get dinner before we left; I promise I’m not bitter) and saw some street art and other cool stuff, which I will get to. Once upon a time there was this street art graffiti festival/competition so there was actually really cool, giant paintings on buildings which you can see in the photos provided. Then we walked down Leonard Lane which was an alley way basically but the walls were all covered in graffiti and paintings. I guess it’s against the law to do graffiti so this one artist decided to paint on pieces of gum. Stop and think for a minute. There are literally drawings by an artist on pieces of gum on the ground. That is both kind of dumb but really freaking awesome and pretty damn hilarious. What a genius. There was also a painting done by the famous artist Banksy on the side of a building (picture included) of a man hanging onto a ledge because the husband just came home. There was a whole story about it but seriously folks, you cannot expect me to remember everything. I am not a sponge, I am a human being who is also still in school and has a lot of other things to remember so sorry if I disappoint you (that was not meant to sound rude but slightly sarcastic and cute. We came across an old pub that Blackbeard frequented. That is pretty freaking cool.

Okay so moving on there was streets and stores and buildings and artwork throughout Bristol but there was one thing that stuck out to me the most. It was the end of the tour and we came to port area next to a statue. The statue was of an Italian man, he was a carpenter (I think) in a lot of debt and guess what he did? I shall tell you. He sailed to the new Western world, came back and TOLD CHRISTOPHER COLUMBUS TO SAIL TO THE NEW WORLD! It was not even Columbus’ idea, he got it from a broke Italian carpenter! Our tour guide said basically only Bristol knows of this dude and the rest of the world gives all credit to Columbus. There is a missing piece of information in our history books folks and I thought that was so freaking cool! That stuck out to me the most. Bristol is probably a really cool city to a lot of people but for me it was too urban, industrialized, and contemporary for my tastes. I’m a traditional, old-fashioned, romantic kind of gal. (Below are more captioned photos from Bristol). 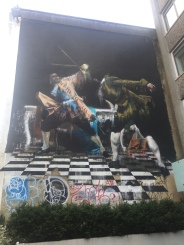 part of the art/graffiti festival in Bristol (artist was Irish, you can see the colors of the Ireland flag [green, white and orange] below the gentleman on the right and colors of the British flag on the gentleman to the left; a Irishman fighting a Brit and winning)

part of the harbor area in Bristol 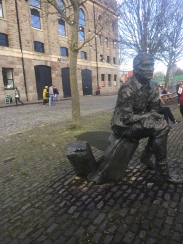 the Italian man who gets no credit

a cool statue in a park 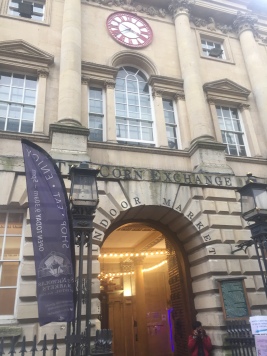 where goods were exchanged in Bristol 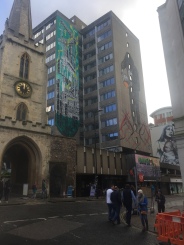 cool graffiti art from the festival/competition 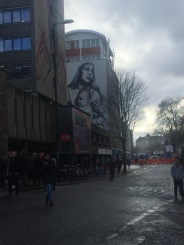 better picture of this graffiti 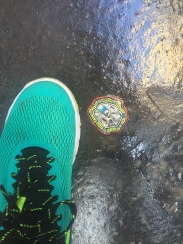 painting on a piece of gum! 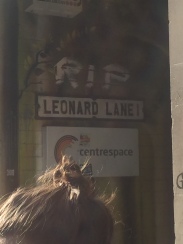 where Blackbeard frequented back in the day 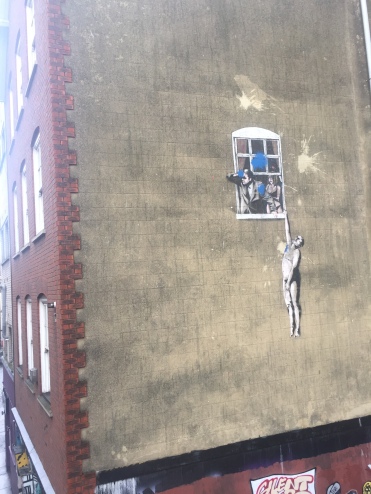 Banksy’s most famous art in Bristol 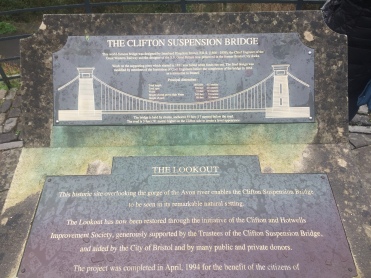 stuff about the bridge 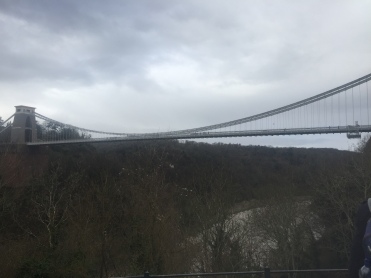 That is essentially my trip to Bristol and Bath! If you visit England and do NOT see these cities, you will NOT die, but if you get the chance, check them out. But again, you will not die without having seen these cities. I did not take a picture of every single thing I saw because I don’t want to get hit by cars and it’s annoying constantly stopping to take a picture when my eyes can see everything just fine. If you want more pictures, see these places for yourself. I like to be in the city and see it, not let a phone control my actions. Again, this probably sounds rude and I apologize but I am simply sharing my experience the way I experienced it. So I hope you at least enjoyed my story and my blunt honesty. Enjoy the pictures!

3 thoughts on “The Two B’s: Bristol and Bath”